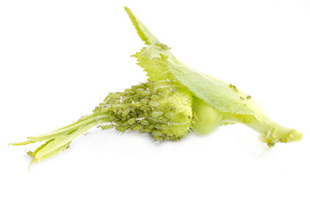 LIFECYCLE: Aphids have a great reproductive capacity and a series of astute strategies, such as vivipary and parthenogenesis, that allow so-called "canning of generations" whereby a female contains already formed daughters inside her that, even before birth, in turn contain other developing embryos. The newborn nymphs can feed immediately; they grow rapidly and, within a week, after four moults, attain adulthood. Furthermore, females can give birth to three to six nymphs per day for several weeks. Their lifecycle is enhanced by warm temperatures and high humidity. In temperate climates parthenogenisis prevails (the eggs are fertile despite no mating between individuals of different sex having occurred), while in cold climents, prior to the colder season, mating takes place and more durable eggs are laid that can withstand adverse weather conditions.

FEATURES: they are covered with a thin integument that is either pale yellow, green, grey, or black. Some forms are alate (winged) and can migrate from one plant to another, reaching new host plants even hundreds of miles away. Non-alate forms instead, after having lost their wings, concentrate all their resources on reproduction, thus rapidly producing highly populous colonies.

DIET/DAMAGE: Aphids have piercing-sucking mouthparts with which they feed on plant sap. At the same time they inject two kinds of salive into the plant tissues: one that contains coagulants isolate the vegetal substances from the suckers, and the other, rich in enzymes including a hormone that stimulates the growth of green plant tissues, inducing the formation of hyperplasias to protect the colony and provide nourishment. The sap on which aphids feed is rich in sugars, the surplus being expelled in the form of honeydew, covering the plants in sugary droplets. This causes the development of saprophytic fungi with dark mycelium, known as "sooty mould", which can hinder the photosynthetic processes of plants, reducing the value of their fruits. Honeydew is a source of food for many insects, such as ants, hoverflies and Chrysopidae, and also useful as honey bees. A truly mutual symbiosis has evolved between aphids and ants, which in many respects is similar to the breeding of domestic animals by man. Indeed, aphids provide the honeydew that the ants love, and they in return carry the various individuals onto young shoots and defend them from predators, although many species of aphids are able to defend themselves. Besides causing direct damage through the removal of plant sap and the emission of saliva that causes physiological changes, aphids also produce serious indirect damage as they can transmit many viruses by feeding on infected plants first, then switching to healthy ones. In nature, aphids are controlled by numerous predators and parasitoids. Among the predators are entomophagous insects that often lay their eggs near the colonies of aphids, such as Coleoptera Coccinellidae (ladybirds), both adults and larvae; hoverflies and Cecidomyiidae larvae; adults and larvae of green lacewings; juveniles and adults of anthocorid and various birds like tits, the blackcaps, swallows, and others. Among the parasitoids are Hymenoptera Aphididae, Aphelinidae, etc. whose larvae develop inside the parasitised aphid.

Back to Aphids I want to sterminate it