The infestation of cockroaches

They have existed for 300 million years and all this time was not enough to cause a change in their predilection for darkness, heat and humidity.

We are talking about cockroaches and their ancestors, primordial cockroaches very similar to those that are roaming today for our houses, which frequented the great forests rich in ferns of the Carboniferous period. These insects, tending to black / reddish, can be seen running at high speed when at night the light turns on in their homes and are among the most primitive that we are known. Now that those "welcoming" habitats have definitively disappeared, cockroaches have chosen as their refuge the dark and damp corners of our homes.

Pipes, cracks in walls, water drains, heating pipes, furniture, coverings or paintings, for cockroaches makes no difference. The night come out into the open from these areas in search of anything edible, and do not make compliments: chocolate, potatoes, sugar, fat; but their favorite food is found in fresh or rotten waste, and they do not even disdain paper, ink or even shoe polish. Ultimately, if the house is warm, humid and rich in food, cockroaches reproduce in large numbers. 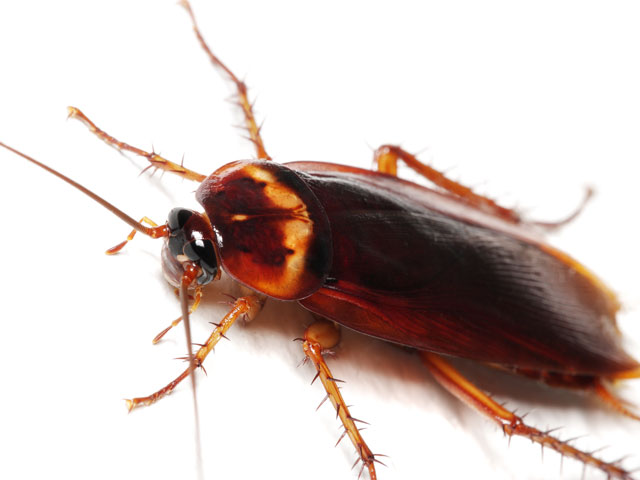 The man usually feels disgust with regard to cockroaches, a disgust superior to that which is felt towards any other insect. One of the causes can be that annoying rustle that the cockroach produces while it moves, which is caused by the rubbing on the ground of the spurs that are at the extremity of their tibias. Another characteristic of cockroaches that annoys us is the nauseating smell of substances that secrete from their glands.

In Italy there are 40 different species of cockroaches but fortunately only a few of these come into our homes. Despite this when they enter defecanum, regurgitate the meal and can transmit microbial diseases, such as salmonella, infecting and disrupting foodstuffs of the exercises such as bars, restaurants and bakeries.

Here in Sardinia, especially in the summer period characterized by high humidity and high heat, they proliferate in mass. A large part of the intervention of Gallura Disinfestazioni concerns the disinfestation against these insects.

A curiosity about cockroaches, underlined by many biologists, concerns their traits in common with men. Just like human beings, they are defined as wandering, ubiquitous, omnivorous and opportunistic beings.

With their long, filiform and mobile antennas they can feel the ground in the dark, they have a very large head with a small brain, they have wings but they almost never use them, instead they make small leaps like grasshoppers. They are also very fast, they run about one kilometer per hour. According to Danilo Mainardi they are a social species because, although they do not constitute a superorganism like bees and ants, they live together and communicate with each other with a kind of acoustic language, know the struggles for the rank and warn each other of the danger.

We can say that the cockroaches, after all these years of adaptation, have become true roommates of man.