Woodworms are xylophagous insects (they feed on wood) and during their life cycle they develop 4 life stages: egg, larva, adult pupa. In the state of larva they dig tunnels that cause structural damage in the wooden artefacts. The ecological anti-woodworm treatment with heat is the only decisive treatment as, unlike chemical treatments, it eradicates the woodworm in any vital stage it is. By bringing the infested artifact to a temperature between 50 ° and 60 ° and keeping it constant, we are sure to eliminate the woodworms present inside that will die due to the denaturation of protein substances.

In the table below, extrapolated from a study carried out by the Mediterranean University of Reggio Calabria, we can see how temperatures affect the life of insects. The temperatures that cause the death of insects within a few minutes are indicated in the red boxes. We go from extremely cold temperatures (from -15 ° to -25 °), however difficult to reach and keep constant, to very hot temperatures (around 60 °) which are the ones we reach and we manage to keep constant with our anti-woodworm treatment. 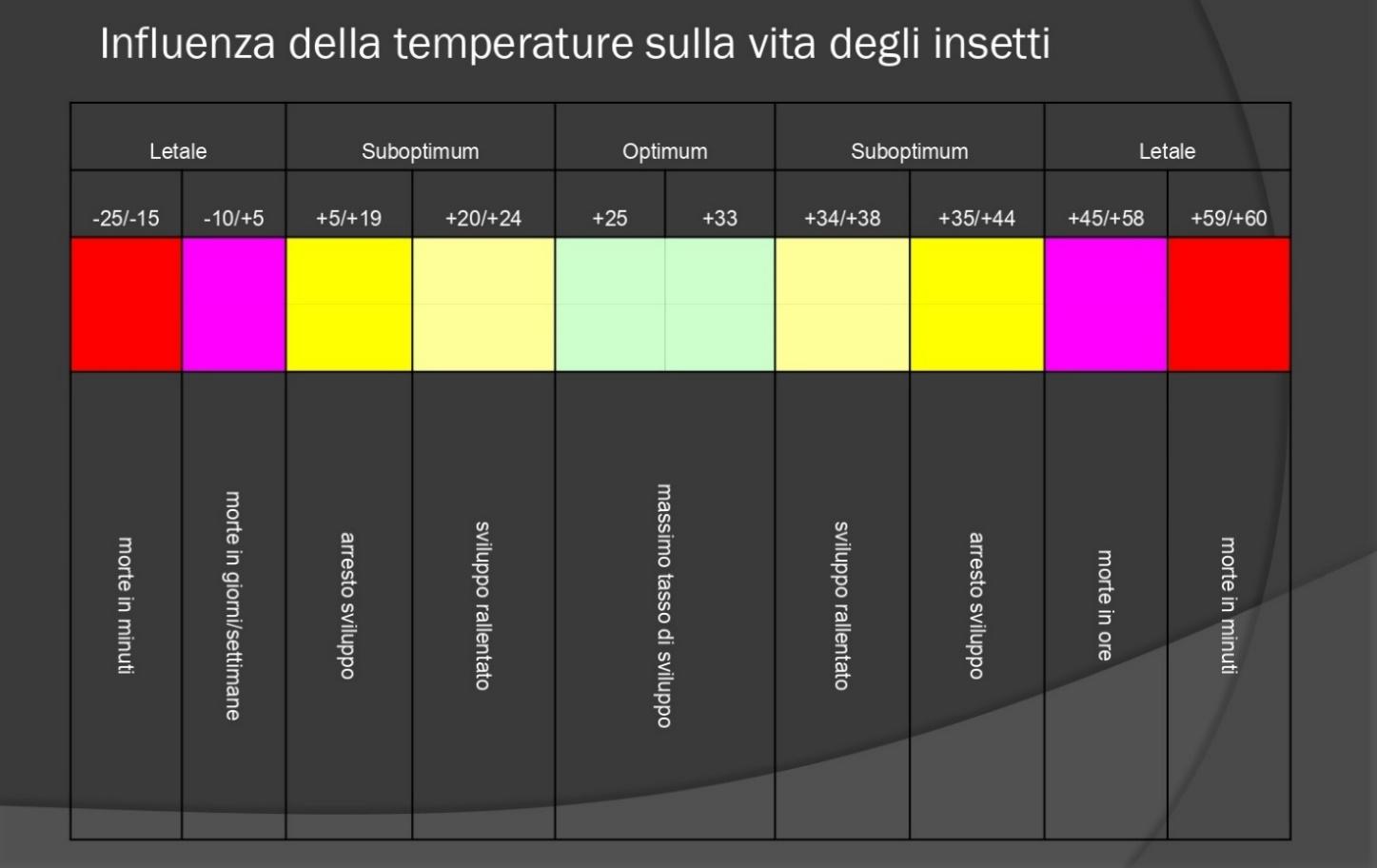 By reaching these temperatures, the ecological woodworm service with heat is able to eradicate the woodworms and also, as mentioned above, is the only one capable of eliminating them in any vital stage they may be.

We would like to focus precisely on the studies of the University of Piacenza that have proven the effectiveness of heat treatments in eliminating insects that feed on woody substances (xylophages).

The studies were conducted on the species of woodworm Hylotrupes bajulus, commonly known as house capricorn, using larvae of the same age raised in an air-conditioned cell at the Institute of Entomology and Plant Pathology of the Catholic University of the Sacred Heart of Piacenza.

These larvae were inserted inside two beams of the same size and brought to the place of treatment. One of them was left in the ground floor rooms that were not treated, while the other was placed in a mezzanine undergoing treatment.

Returned to the laboratory and analyzed, the woodworm larvae of the untreated beam were alive while the others were all dead. This demonstrates the total effectiveness of both the ecological anti-woodworm treatment with heat on fixed wooden artefacts and the anti-woodworm service with heat chamber based on the same principles but especially suitable for those who have to treat furniture, ornaments and non-fixed artefacts that can be transported to our premises.

There are numerous advantages brought by heat disinfestation:

We remind you that for these types of treatment there is a tax credit of 50% aimed at a restructuring, restoration and conservative restoration of the wooden structural elements of the customer's home.

For more information and quotes contact us by following our form.