The difference between termites and flying ants

Present in the Mediterranean regions, termites are xilophagous insects, that is wood-eaters.

Equipped with robust jaws with which they destroy the woody mass, they distribute the nourishment among the individuals through gold-oral or even gold-anal trophallaxis.

The termites live underground in colonies of thousands of individuals and are dangerous because they can cause serious damage to the furnishings and the wooden structures of the houses.

They live and work in the heart of wood and, in trying to reach it, can damage electrical wires and all the insulating materials they find on their way.

Their escape the light also makes it difficult to identify the damage to artifacts, since it is rare to see them in the open if not during the nuptial flight.

The only solution is to rely on the diagnostic intervention of a professional. 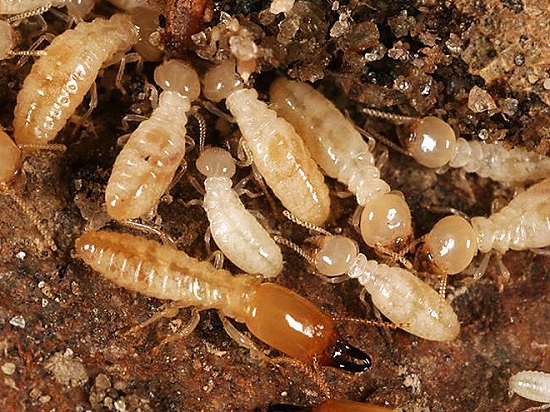 Sometimes it can happen to confuse the termites with winged ants. The dimensions are similar but the two insects have different morphological differences that help to distinguish them.

Recognizing these differences is very useful in order not to underestimate the problem of the presence of termites which, as we wrote earlier, are much more dangerous than ants.

Unlike the latter, the termites have two pairs of perfectly equal wings, straight antennas and have no obvious narrowing between the abdomen and chest as the winged ants do.

The image below helps us understand the differences described.

The Gallura Disinfestazioni, leader in Porto Cervo and Porto Rotondo, specializes in the elimination of termites colonies and uses guaranteed systems with a very low environmental impact that allow immediate use of buildings affected by the pest.