In recent weeks there have been several reports of significant infestations of “Velutina” wasp throughout Northern Sardinia.

“ Velutina” wasp commonly known as Asiatic Yellow-legged Hornet is one of the alien species (introduced by humans from another ecosystem) more aggressive and dangerous for humans and other species of insects (eg bees).

Spread in Eurora from France, it then reached Spain, Portugal, Belgium and Italy.

It generally nests near the inhabited centers and in the vicinity of the houses and each nest can contain thousands of specimens.

The main danger is represented by the female specimens, the only ones with a sting.

The stings of this Asian hymenoptera can trigger a serious allergic reaction known as anaphylactic shock, which can lead to asphyxia and cardiovascular collapse and sometimes be fatal. In the most sensitive individuals, only one puncture can create serious complications.

Although the “Velutina” wasp has different characteristics, it could be mistakenly confused by an untrained eye with the common european hornet.

Here is a summary of the main differences between the two species: 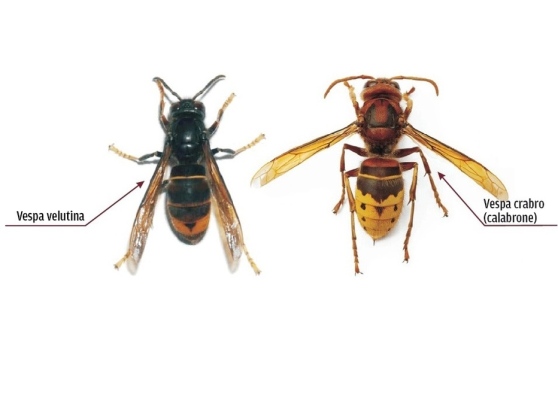 If you have identified a honeycomb our expert technicians promptly intervene against this type of pest in a professional and decisive manner.