The palm tree tragedy in Sardinia: the Red Weevil

Rhynchophorus ferrugineu commonly known as Red Weevil is a parasite native to Asia. Appeared for the first time in Europe in 1994, specifically in Spain, the Red Weevil is an organism that is particularly harmful to several species of palms. The first report in Sardinia of the Red Weevil was made in 2007 in the municipality of Barisardo. Subsequently, the infestation spread throughout Ogliastra, where more than 500 palm trees have been slaughtered, almost all of which belonged to the Phoenix canariensis species, while P. dactylifera seemed more resistant. The damage caused by the Red Weevil is visible only when the infestation is now in an advanced stage: the crown of the palm begins to have an abnormal bearing, loses its vertical symmetry until it assumes a completely enlarged arrangement that makes it look like an open umbrella. In the terminal phases the plant collapses, the complete loss of the leaves is reached and the Red Weevil present inside migrate in search of new palm specimens from which to feed. 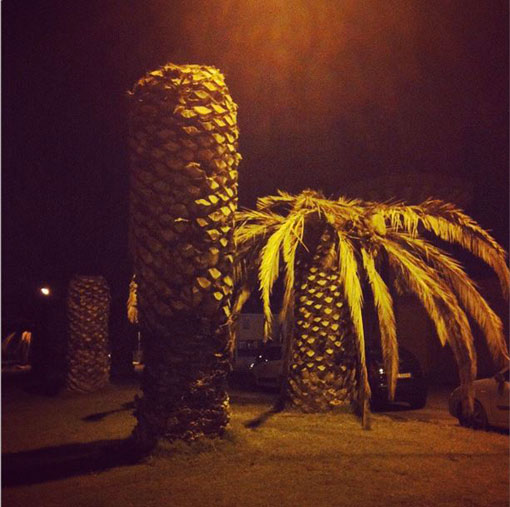 The difficulty of intervention is given by the fact that the Red Weevil plays a large part of its biological cycle inside the plant, being difficult to reach by the common control systems. Given the great importance of palm trees on the landscape and natural landscape the Region of Sardinia intervened by implementing a three-year program for the eradication of Red Weevil based on different interventions: Monitoring of adults with traps triggered with pheromone aggregation that capture individuals of the sexes, useful for detecting the entity of the insect population present in a given territory. Biological control: being a newly introduced parasite in our territory, there are no natural antagonists capable of exercising significant control. Among the biological agents reported on the Red Hawkwood are the nematode Praecocilenchus ferruginophorus, the bacterium Pseudomonas aeruginosa and a cytoplasmic polyhedrosis virus that attacks all the larval stages. Despite all these natural enemies of the Weevil have not yet been used effectively in the biological struggle. 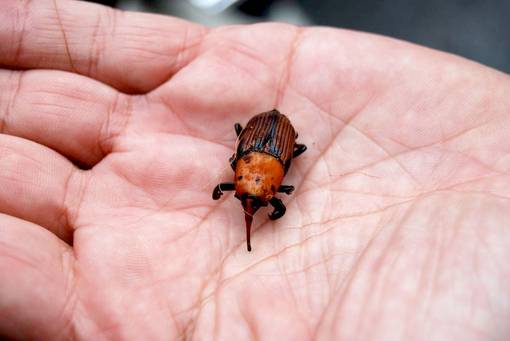 Crop control: consists in the elimination of the affected or symptomatic plants, allowing the elimination of the infestation outbreaks represented by the plants that may contain hundreds of individuals of Red Weevil in the different stages. Various systems such as shredding, burning and burial are allowed. Biotechnical control: based on the use of traps (identical to those used for monitoring) triggered with aggregation pheromones for mass capture, called mass-trapping. The aim is to capture the majority of adults to reduce the population density of the Red Weevil. The effectiveness of the method depends on density, dislocation and management of the traps. The results of this method of preventive fight can only be observed in the long run. Use of microwaves: they owe their effectiveness to the ability to heat a material in a differentiated and selective manner based on the water content. The treatment involves the use of machines equipped with electric microwave generators which radiate very high frequency energy towards the center of the palm. With this technique the mortality of the different stages of the awl varies from 55 to 100%, with insignificant damage to the palms. Chemical control: The most effective anti-red weevil measures are preventive measures based on insecticide treatments with authorized plant protection products. However, given the small number of registered products, the Italian Ministry of Health grants special exemptions for the use of particular plant protection products on palm trees. 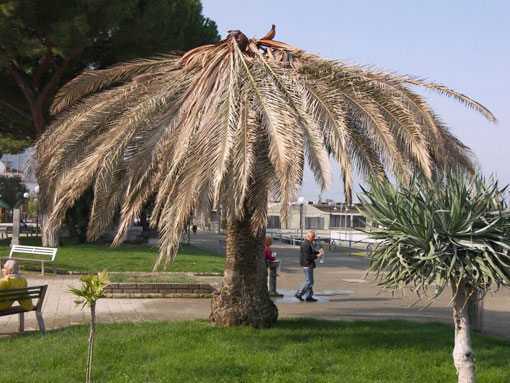 The goal of interventions with contact insecticides is to kill adults before the infestation has occurred. These treatments, repeated periodically, could limit infestations, but find difficulty in being applied in urban environments. Furthermore, the typically endophyte behavior of the larvae makes the curative intervention problematic by endotherapy on already infested plants, since the same larvae can settle deep inside the jamb, exploiting the considerable dimensions of the attached plants and the particular structure of the conducting vessels of the palms.The effectiveness of endotherapeutic treatments can not always be guaranteed. The crackdown set by the Sardinia Region, with funding of several hundred thousand euros, is symptomatic of the scale of such a serious infestation.